Test and demonstration of new harrow machinery in organic cereals 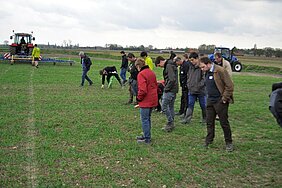 For many years, the traditional tined harrow was the basic tool for weed control in arable crops as cereals, legume crops and potato. The only question to be answered was the brand. Nevertheless other similar machinery becomes available. The ‘rotary hoe’, which is popular in France, isn't known in our regions. Treffler introduced with the ‘precision tined harrow’ a totally new concept of the tined harrow. Farmers are interested in these new developments but ask about their added value as they are more expensive too. Especially for new organic farmers it is not easy to make a good choice.

We brought together different harrows for a one day demonstration and a field trial. Field conditions were hard because of a very crusty soil. The precision tined harrow had a better impact on soil and weeds as each tine independently makes its own trace. The rotary hoe just putted small holes but broke up the crust that way. Two successive interventions doubled the efficiency on weeds.

A European farmers meeting confirmed our Flemish experiences and stressed out that weed control in organic cereals is much more than harrowing. An integrated approach is needed taking into account weed ecology, soil conditions and weed suppression of the cereal crop.