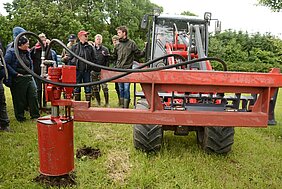 Weed competition is a big issue in organic farming. In pastures docks are often present in colonies and in Denmark the control is often involving excessive ploughing and other kinds of tillage. The need for mechanical solutions are real, as controlling the docks will result in a buildup of organic matter in the soil by 1000 kg N/ha for each year the pasture ploughing can be extended. No mechanical treatment seems sufficient, though, so the need for innovation and new tools is addressed through testing of the WUZI dock-cutter that terminates docks and prevents regrowth.

The WUZI dock-cutter is tested and demonstrated among agricultural farmers in Denmark. It is a good way of controlling the weed manually, as it is more convenient than digging up the docks with a spade, but it is still time-consuming (20-30 sec. per dock) and expensive to occupy a man and a machine. In a field infested with large dock colonies, the dock-cutter is too time-consuming as it only drills out one dock at the time. In that case it is recommended to plough the field or cut the docks before they set seeds.

The WUZI dock-cutter is mounted on a mini-loader or a front loader on a tractor. Adjustment might be necessary. The docks are drilled/terminated by firstly placing the drill on top of a dock and then secondly using the oil pressure of the loader to turn on the cutter and terminate the dock. The cutter drills about 20 cm into the soil, which is enough to destroy the point of growth and thus prevent regrowth. After the drilling, it automatically applies grass seeds to the bare soil where the dock was treated – an important function, as it provides competition to the dock-seeds that might sprouts later in the growing season. The applied grass-seeds competitiveness was tested on two locations during the growing season of 2017 and it shows good results.