According to a recent communication of IFOAM EU, on 27 November the European Commission decided that the active substance copper will be re-approved as a plant protection agent for a period of seven years. 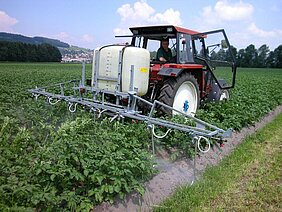 Currently copper is approved as an active substance in plant protection products in the Central and Southern zones. It is effective against more than 50 different diseases in conventional and organic viticulture, horticulture, hops, market garden and arable crops. In particular, it is used in vineyards to control downy mildew (Plasmopara viticola), on arable crops to protect potato against late blight (Phytophtora infestans), in apple orchards to prevent the spread of scab (Venturia inaequalis) but also in other crops.

Practitioners and researchers are working intensively on finding innovative alternative strategies to further reduce the use of copper in organic agriculture. The copper minimisation is well reflected in the development of the organic regulation. The organic movement was the first to put a limit to the use of copper in plant protection in the year 2000 and has been minimising from 8 kg to 4 kg / ha / year since then.

Once a year, during the European copper conference, this work is presented and discussed by a wider audience. At the 3rd European conference on copper in plant protection almost 100 stakeholders including scientists, regulatory bodies, practitioners, advisors and farming associations from eight different countries discussed on the current and future role of copper in plant protection strategies in organic farming.

The first part of the conference looked into the question of adequate risk assessment concerning natural substances like copper for which IFOAM EU was advocating throughout 2018. The organic community welcomed the EU Commission’s move to mandate the European Food Safety Authority (EFSA) to draft a special Guidance document for the appropriate risk assessment of minerals to better understand the effects of copper on humans and the environment. According to the scientific community, the sound assessment of minerals needs to be a priority.

Copper minimisation strategies from Austria, France and Germany were presented and it was made clear that time and money, especially for research into organic plant breeding, is urgently needed to further minimise the use of copper in plant protection. One important step in this direction is the Horizon 2020 project "Replacement of Contentious Inputs in Organic Farming Systems" RELACS, which is researching alternative inputs, in which IFOAM EU is participating together with 11 of our member organisations.